Alé, the city of women

It's still the city of women, despite the fact that after ten years Alé is forced to take a step back and reluctantly leave the Champions League of pink cycling, the World Tour women, the only tricolour team at home.

p>With the Ronde van Drenthe at the end of October, the last round of the UCI Women's WorldTour, the cycling adventure of the Alé BTC Ljubljana team came to an end. End of transmissions at the end of an extraordinary season, with 20 victories, 17 of which of absolute weight, never so many for the team of Bonferraro di Sorgà (Verona): one European gold medal in time trial and two silver medals, always in time trial and always with the Swiss Marlen Reusser at the Olympic Games of Tokyo 2020 and at the World Road Championships Flanders 2021. Alessia Piccolo's team, directed by Fortunato Lacquaniti - Giuseppe Lanzoni, has been in the Top 10 110 times.

"In life, the important thing is to be able to take advantage of opportunities, understand your role and in certain cases, like this one, understand with humility where you can go and until when - explains Alessia Piccolo, president of the team, as well as managing director and general manager of Alé -. We are convinced that we did the right thing at the right time. Just as ten years ago, in 2011, we began a journey in the world of women's cycling with a project that took us to the top world series with a great deal of satisfaction, so we realised that the time had come to take a step back, to put the team on a secure footing and thus guarantee the athletes and staff (around thirty people in all, ed.) a future. We've done well to get this far, now we're passing the baton to Mauro Gianetti's Uae Emirates, which has everything it takes not only to continue this project, but to intensify and grow it. One thing I would like to say: the team was not sold, but sold for a symbolic euro. The priority for us was only to guarantee a future for this team, which will change its skin, but I believe it will retain a piece of our heart.

A step backwards, a passing of the baton to one of the most powerful and important teams on the planet. But we will remain in the women's cycling environment, helping BikeExchange: from next year we will be engaged as official supplier of both the men's and women's teams," explains Piccolo, who this year has brought her Alé brand, created in 2014, to a turnover of over 31 million euros. It is likely that she will also give a hand in the Veneto region to some youth teams, because it is true that it is nice to be in the World Tour (annual cost of 1 million and 400 thousand euros, ed.), but we need to safeguard the nursery. There are a lot of young girls who would otherwise risk stopping racing and even the major teams, our national team, could encounter a problem of vocations. In short, everyone must continue to give their support and contribution with the means at their disposal, we will do our part'.

And then the thanks. "To BTC Ljubljana, which in recent years has shared a part of our journey with us. But thanks also go to Fortunato Lacquaniti, our team manager, who over the last seven years has made a big contribution to the growth of the whole team. I still remember when we started our journey with a small team of only Italian girls and today we leave it fourth in the world ranking". It is still a city of women, the Alé knitwear factory. A reality of 150 employees, 120 of whom are women. Of the men, one could make a complete list, since they are few. Starting with the marketing manager, Alessandro, a former biker who joined Alessia Piccolo's team in September. With him also Lorenzo and Davide, who are part of the "blue quotas" of Alé, as well as the accountant, Nicola.

A pink team that makes teams. From BikeExchange to the 2021 revelation Bahrain Victourius and Groupama Fdj. But as well as the Uec (European Cycling Union) jerseys, there are also those of the Giro di Sicilia and Croatia, the Uae Tour and the Bardiani CSF Faizané.

" We're not backing down, we're all used to looking only ahead," concludes Alessia Piccolo. "We have ambitions and dreams, always in the name of the quality and design that have always distinguished us. Quality and fashion, for personal and customised clothing. Glamorous" clothes, but above all technological. It's not for nothing that the cycling world has rewarded us in recent years: both among the professionals and among those who simply like to ride for the fun of it.
With an Alé jersey, the city of women, that everyone likes. 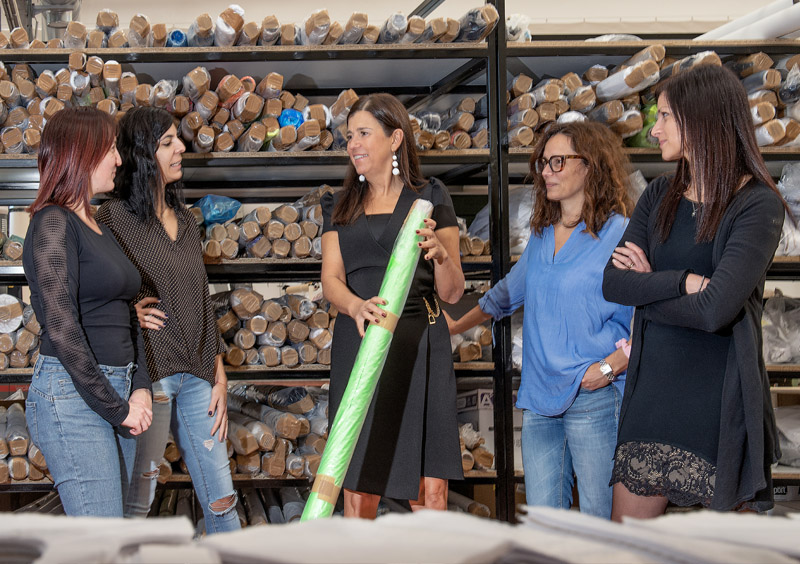